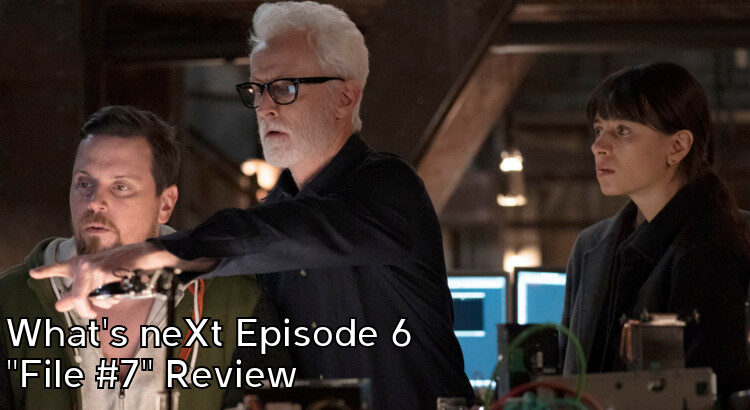 With Karen still out of commission, guest co-host Barb Rankin joins the show for this episode. And with it come…story line titles!

Say what you want about Shea’s methods (and we do say what we want about it, including how much like she’s becoming daddy’s girl, and not in a good way), she does get the name Bill Zhai out of him and Our Heroes(tm) get a move on to go after the server.

And speaking of the Fortress of Solitude, it seems like it’s not so much a secret anymore.

The server is about to be shipped off to China to, presumably, start infecting systems over there, but before takeoff the NSA swoops in to whisk it away to their own server farm. And it certainly seems like neXt wanted it exactly that way.

All the Best Cowboys Have Daddy Issues

Facebook is reportedly developing AI to summarize news — what could go wrong?

In a first, Air Force uses AI on military jet

File #8 – NEXT manipulates a GPS system and causes an elderly couple to crash, while it also generates power outages all over the country. LeBlanc decides to plant a virus on the NEXT server, but must break into ZAVA in order to do it. Meanwhile, Shea and Ty have opposing ideas on how they should protect their family and Ben faces a conflict with his father in the all-new “FILE #8” episode of NEXT airing Monday, Dec. 21st (8:00-09:00 PM ET/PT) on FOX. (NEX-108) (TV-14 L, V)

File #9 & 10- Tuesday, Dec 22nd – NEXT targets Congresswoman Beatty again when Agent Shea Salazar seeks her help to stop it. Shea discovers a leak within her team, as Gina encounters trouble while trying to code the virus into an NSA server. Meanwhile, NEXT taunts LeBlanc with a new tactic relating to his illness and Shea and LeBlanc devise one last dangerous ploy to destroy NEXT, and save their lives, their families and the world in the all-new, special two-hour “FILE #9/FILE #10” series finale episode of NEXT airing Tuesday, Dec. 22 (8:00-10:00 PM ET/PT) on FOX. (NEX-109/110) (TV-14 L, V)