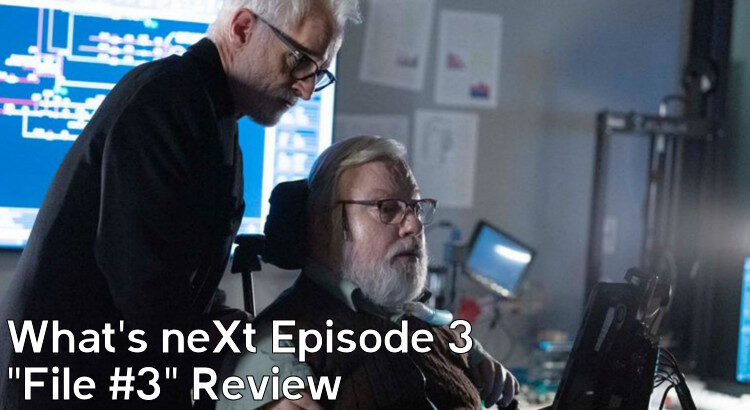 For this episode, Karen was under the weather, so it’s just Doug talking about the episode “File #3”, wherein we find out what neXt has been doing in Dartmouth (if it was ever there).

Agent Salazar and Paul LeBlanc go on a road trip to Dartmouth to investigate where the signal to Iliza came from. Turn out that Robert Pearish, one of the few people that LeBlanc says likes him, is in charge of the Bioprinting (and robotics) lab. Our heroes are given (what appears to be) full access to try to track down the code. LeBlanc can’t find anything but he’s suspicious. Late at night, after a discussion of reality vs hallucination, they break in to find out what’s really going on, only to find Pearish still in there. When LeBlanc suspects that neXt has taken control of Pearish’s wheelchair and speaking software, a reboot confirms it. Salazar, in the meantime, gives in to a diversion that neXt sets up. and gets surrounded by robotic Dobermans. A shot kills one, but another runs off to kill Pearish.

Meanwhile, Ty and Ethan Salazar are off on their own road trip to a mountain cabin off the grid. On the way, however, neXt sends out an Amber Alert for Ethan. CM, using some social engineering, manages to get control of the website and cancel the alert (just in time, naturally).

And finally, neXt releases a Honduran con from prison and seems to get him on a flight outta’ Dodge with pictures of the Salazars. That can’t be good.